How Star Wars Won Over Social Media | From TV to Tablets

May the Force be with you, and your marketing projects.

by Büşra Gündüz
in Get Inspired

Happy May the 4th Star Wars Day, folks! It is yet another day to try to mimic Yoda in being wise, and get motivated by the Imperial Attack soundtrack. Today, we are also going to look at how Star Wars, an originally conventional media product, is still ruling the new age.

If you are not familiar with Star Wars, first of all where have you been hiding? Is it good there? Do you have a pandemic like us? You should maybe watch the series first before reading this article.

The old but gold movie series, Star Wars, started in 1977 with the movie “A New Hope” and the last part of the third trio was released in 2019, with the name “The Rise of Skywalker”. There are still movies in the making about the times in between the movies for characters so we cannot say the Star Wars era is over. And even if the series end at some point, it will be long before its effects are invisible on social media. Let’s see how Star Wars used conventional media in its time and how it is still relatable in today’s media.

From The Success of the First Premiere

Star Wars’ success in conventional media comes from the very first marketing techniques used in the premiere of the 1977 movie. Director George Lucas commissioned artists and agencies to create an intimidating poster for the premiere. The Star Wars logo as we know now was also created with this mindset. Posters for the movie carried a dark and scary side as well, with Han Solo and Leia standing in front of Darth Vader to create an intriguing feeling. Even though the first options for the posters were then changed as they were too “dark”, they still worked to generate $550M revenue in its initial run.

The movie was highly acclaimed in its special effects, and people were hooked on the story from the first movie. “A New Hope” was so successful that in 1989, it was selected for preservation in the National Film Registry

Fast forward to the 2010s, Star Wars as a franchise collaborated with many brands for their upcoming movies. The series also inspired many brands to create Star Wars themed advertisements. One of them is the 2011 Volkswagen ad aired during the SuperBowl.

In the ad, a mini sized Darth Vader tries to use The Force to move things around. His force only works on Volkswagen, with a help from his dad. The advertisement is both funny and nostalgic, linking childhood with a brand new product. It was a huge success for Volkswagen. And it was revolutionary in the way a popular culture product like Star Wars was integrated into a commercial about nothing related to the movie.

Star Wars worked with Porsche, Pandora, Starbucks, and even more brands to promote the movies. But it became a social media phenomenon after 2015, with the movie “The Force Awakens”. The last movie before this one was in 2005, when social media wasn’t even a thing. So with 2015, came the social media frenzy of Star Wars franchise.

Preparing for the premiere of “The Force Awakens”, the founder of Facebook, Mark Zuckerberg shared a photo of his daughter Max wearing a brown Jedi robe on Facebook. In the photo, little Zuckerberg was accompanied by Chewbacca and Darth Vader plushies, as well as Sphero BB-8. The post inspired people to share their Star Wars babies, and countless Facebook users joined Zuckerberg to celebrate the film’s release. 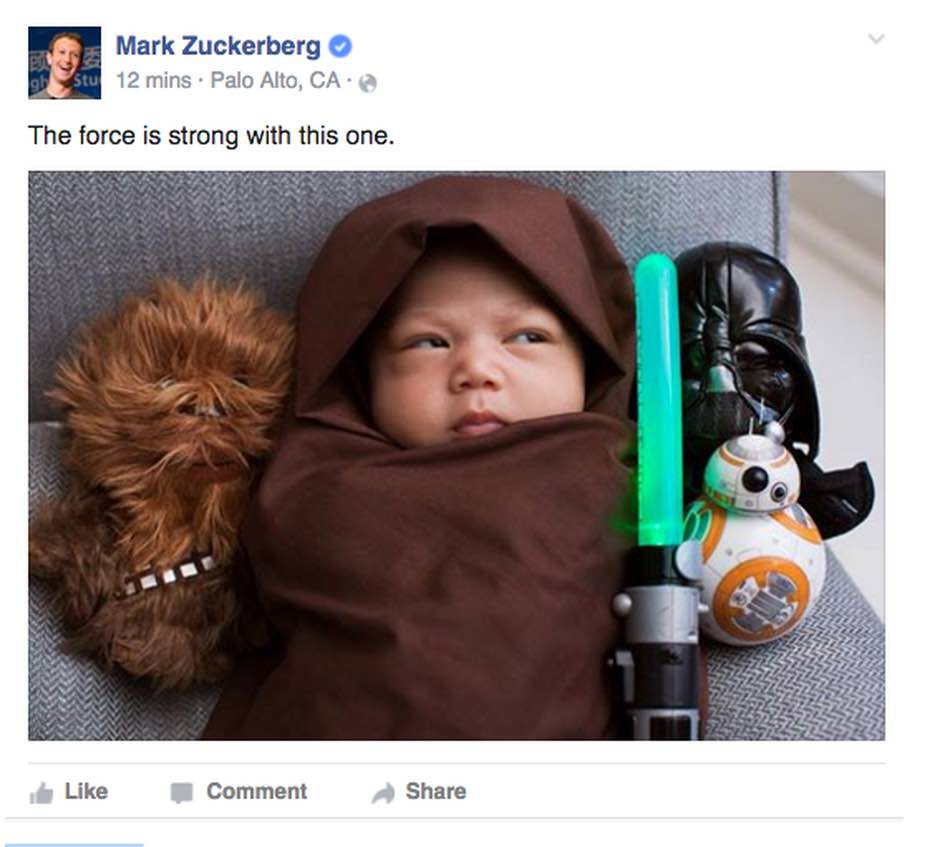 Zuckerberg’s photo wasn’t the only post on social media for the movie at the time, or the shares stopped after the premiere. On every 4th of May, fans of the series flock to social media to share memes, videos, and much more on their accounts. By the way, 4th of May is also created by fans on social media, it had nothing to do with the franchise at first. But now even the official Star Wars accounts use this day to celebrate the movies.

And the latest tweet that went viral came from Luke Skywalker himself. We warned you from our screens Luke. If only you’d heard us.

Smart dog. I only wish I'd thought of hiding behind the couch when I first met him. https://t.co/oi7XtNy8lA

But how did Star Wars become this popular on social media?

One of the reasons is that Star Wars is an ongoing series. Even though it started at an age where the internet wasn’t even that common, the series kept going during the period of Millenials and Gen Z taking over the digital world. In a way, Star Wars is a comprehensive franchise, and there is a place for every generation inside.

Another reason is that they casted visually attractive actors to play the roles. Daisy Ridley and Adam Driver basically ruled social media when the movie first came out. They were also seen as good role models with no scandals in their pasts. They were just right for the new audience, Gen Z, and the older generations.

The franchise collaborated with brands with a large audience. One of these brands is Starbucks, and they basically sold mugs with Star Wars themes. This may come as a simple marketing project, however, from boomers to Gen Z, everyone knows about Starbucks. So it was a clever move by the franchise to collaborate with this brand. We all know everyone likes to share their pretty Starbucks drinks.

With this project, coffee lovers had the chance to share their pretty drinks, in their exclusive Star Wars mugs. Way cooler than the plastic cups, if you ask us.

Another unusual but clever marketing project was the Louboutin collaboration in 2017. Louboutin created a collection for the movie “The Last Jedi” and displayed them at the Red Carpet. All shoes were auctioned off and the benefits were donated to Starlight Foundation for children. Through the project, Star Wars had the chance to reach the high-end fashion audience on social media, and create a social responsibility project.

Star Wars world is a huge one, to say the least. The examples we gave above are just a fraction of what Star Wars has done to gain its popularity. We’ll be diving more into details in the upcoming articles with other movie universes as well. Keep following us on our social media to be updated, and “don’t underestimate the force” of social media.

Live Shopping: What Is It and How Does It Work?